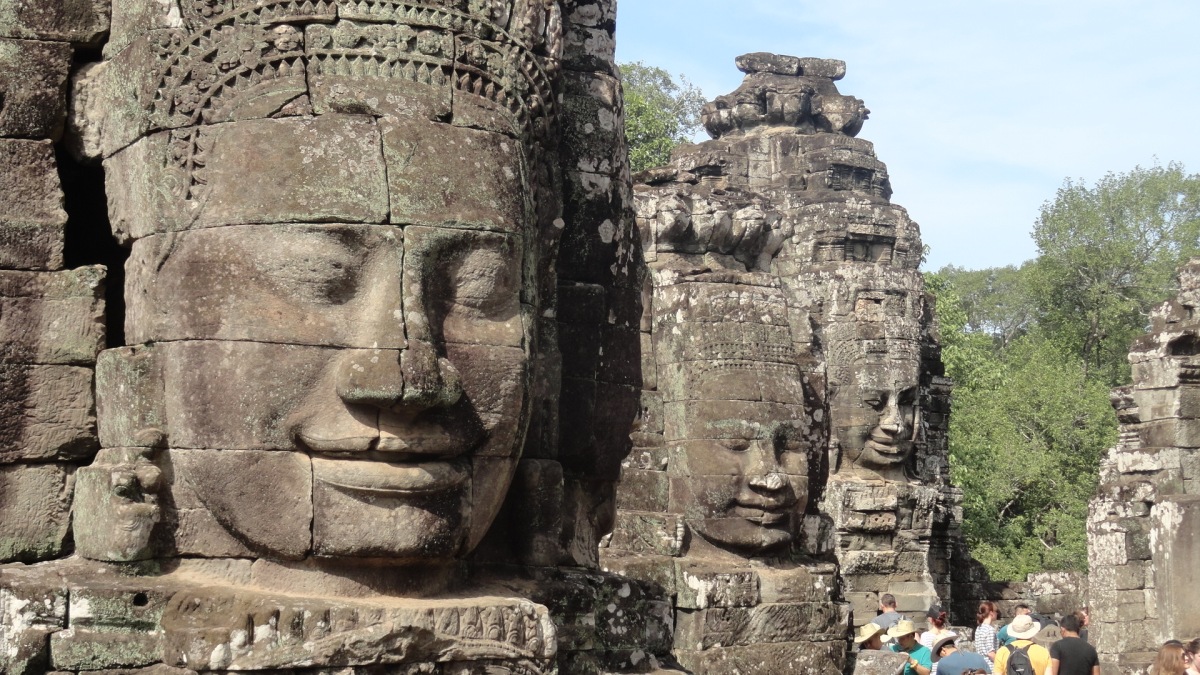 There are so many temples, we didn’t know where to begin.  We bought a 3-day pass and this is our story while touring the temples of Angkor.

There are hundreds of temples but the main ones are located on one of two creatively named loops – the Big Circuit and the Small Circuit. But before you go, make sure you check out our guide to visiting Angkor Wat. It will tell you more than just the temples we visited in this post.

The Big Circuit – Temples of Angkor

Our driver picked us up at our hotel and drove us to each site on the big circuit.  He dropped us off and just waited patiently on his tuk-tuk at each place until we returned.

Pictures will give you a better idea of whether you want to see these places than my prose, so most of this post will be pictures.

Our first stop was Pre Rup. Pre Rup was good simply because it was the first temple we ever saw with this type of architecture.

I don’t know how long it’s going to last, but a great thing at most of the temples is that you are allowed to climb all over these temples. I bet some day that will not be allowed anymore. Enjoy it while you can.

East Mebon was unique because of all the elephants there.

Ta Som was the first temple we saw that was overgrown with vegetation.

Neak Peak is known for the peaceful structure in the middle of a pond.

Of all of the temples on this day, Preah Khan was the best, so it was nice that it was our last temple of the day. It was the largest temple so far. And the trees encroaching over the temple were spectacular.

On day 2, for $15 our tuk-tuk driver took us around the “Small Circuit”, which seems to be named that only because it is smaller than the Big Circuit.

We started by visiting the signature structure of the Cambodian ruins – Angkor Wat.

The place is huge – we spent almost two hours wandering around.

We could have spent more as we could have climbed partway up, but that line was 45 minutes long.  We decided to pass, as we did not want to stand in 80+ degree heat and sun for 45 minutes.  At least when we walked around we could duck inside or at least be in the shade for a while.

The challenges with going to Angkor Wat in the morning is the position of the sun and that all the pictures of the temple are backlit, and that also apparently everyone else starts their day at Angkor Wat.

We rode over the bridge and through the magnificent gate of Angkor Thom, but disappointingly the driver did not stop.

We then went to Bayon and spent over an hour in there.  You may not know the name, but when you look at the pictures, you will probably recognize the faces of Bayon.

What I did not know is that there are over 200 of these faces on the towers of this temple.

Our driver actually dropped us off at Bayon and told us he would meet us at the Terrace of the Elephants. We had no idea where that was. He didn’t understand our questions. We took a leap that we would find him somewhere on the other side.

After Bayon, we walked to the next temple, which was Bauphon.

We exited the back side of Bauphon and followed the path (and crowd) and came to a temple wall that looked like a giant reclining Buddha.

We continued to follow paths until we finally came upon the Terrace of the Elephants.

Knowing that we had a third day on our Angkor Pass, and since we spent so much time at Angkor Wat and Bayon, we decided to save other temples on the Small Loop for tomorrow.

After missing out at the entrance to Angkor Thom yesterday, we decided to inquire about a specific list of temples that we wanted to see and agreed to a price of $15 for our tuk-tuk for the day.

Our big goal for the day was Ta Prohm, but since we hired a driver, we wanted to squeeze in a few more temples. We asked to go to Banteay Kdei.

Along the way, our driver stopped at some temple which I don’t even know the name.

We then moved on to Banteay Kdei.

A nice thing about this temple was that it was not crowded at all. It  was nice but we weren’t that impressed compared to other temples. If we had to do it over, we would probably skip this temple. It was kind of a far ride for seeing a temple that we thought was just all right.

Ta Prohm became famous as the site of the Tomb Raider movie with Angelina Jolie.

Yes I know I am not the best photographer, but in my defense it seemed that the sun was always in the worst for a picture I wanted.

Ta Prohm is definitely one of the highlights of Angkor, so don’t miss it.

There are a LOT of temples at Angkor. If you only have one day, see Angkor Wat, Bayon and Ta Prohm.

Three days is better. Be sure to do the “Big Circuit”and the “Small Circuit”, preferably the Big Circuit first and save the better temples for the end.

We recommend going early in the day to beat the heat and also not going to temples all day long so that you don’t get “temple fatigue”.

You can hire a car for the day (bonus air conditioning), but a tuk-tuk feels more authentic.