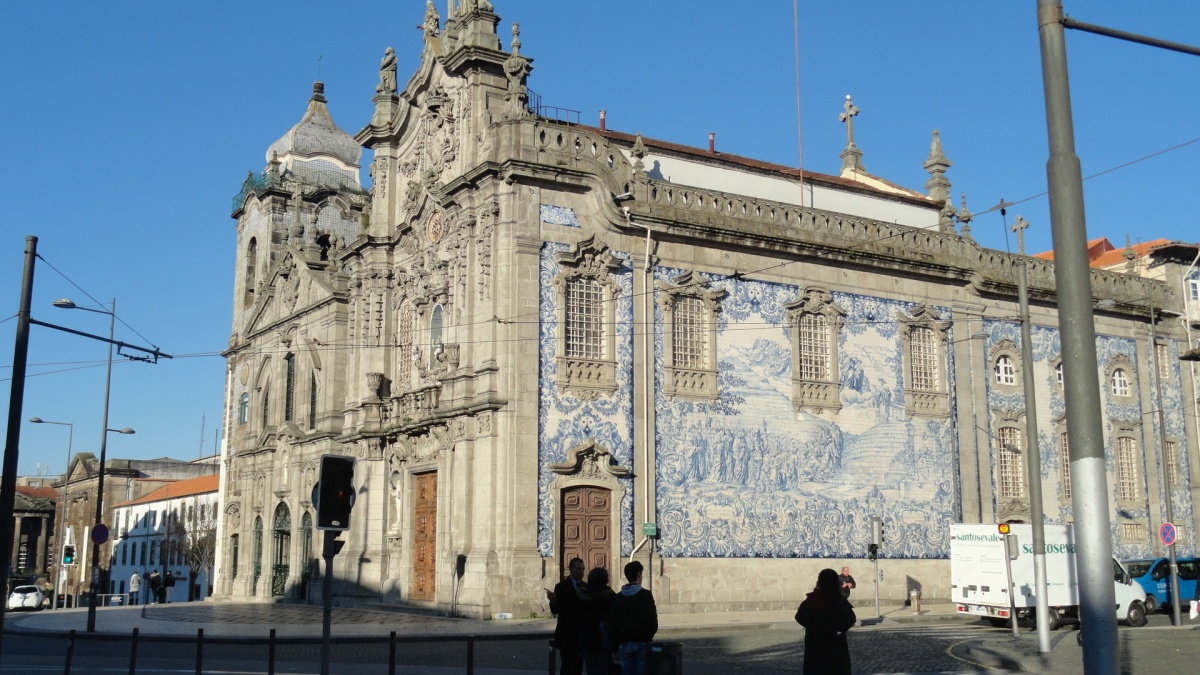 The thing that stuck out to me most in Porto was the number of buildings covered in tiles (known as azulejo). There were even buildings I thought were brick, that upon closer inspection, were actually tile. Just walk anywhere and you will see them.

Even the train station has azulejo tiles.

Walk across the Dom Luis I Bridge to get an iconic view of Porto.

Be sure to see Placa da Ribeira. You may want to stop and eat.

If you like churches (we do) you have to visit the Porto Cathedral. It’s free. Plus there is a great view of Porto and the River Douro from the plaza in front.

Though it has a plain stone facade, it’s much nicer inside.  €3.50. Though, for free, the Porto Cathedral is nice too if you just want to see a church.

Cross the Dom Luis I bridge and you get a look at the only remaining part of Porto’s city wall.

With city hall at the far end, take a stroll along this grand avenue. (There was a concert when we were there; normally that tent isn’t blocking the view)

Unfortunately, the Crystal Palace, after which the park was named, is no longer there.  However, if you want to get away for a quiet stroll at a park, this is the place to go.  The closest Metro stop is Aliados on the D (yellow) line.

The gardens are free to roam until dark.

Porto is the home of port wine, so you should consider a wine tour or at least a wine tasting.  Opportunities abound all over Porto, but the best cellars are across the Douro river on the south bank in Vila Nova de Gaia.

An amazing old bookstore with with a grand staircase. It’s like something you would see in a movie. It has been called by some, The most beautiful bookstore in the world.

We arrived when it opened at 10:00 and there was a huge line two blocks long.

At the front we noticed a sign that said vouchers €5. I think that means you can get a voucher to skip the line but I don’t know where you get it.

Apparently J.K. Rowling would frequent Lello when she was living in Porto. That’s probably why the line was so long.

Summary: Things to do in Porto Portugal