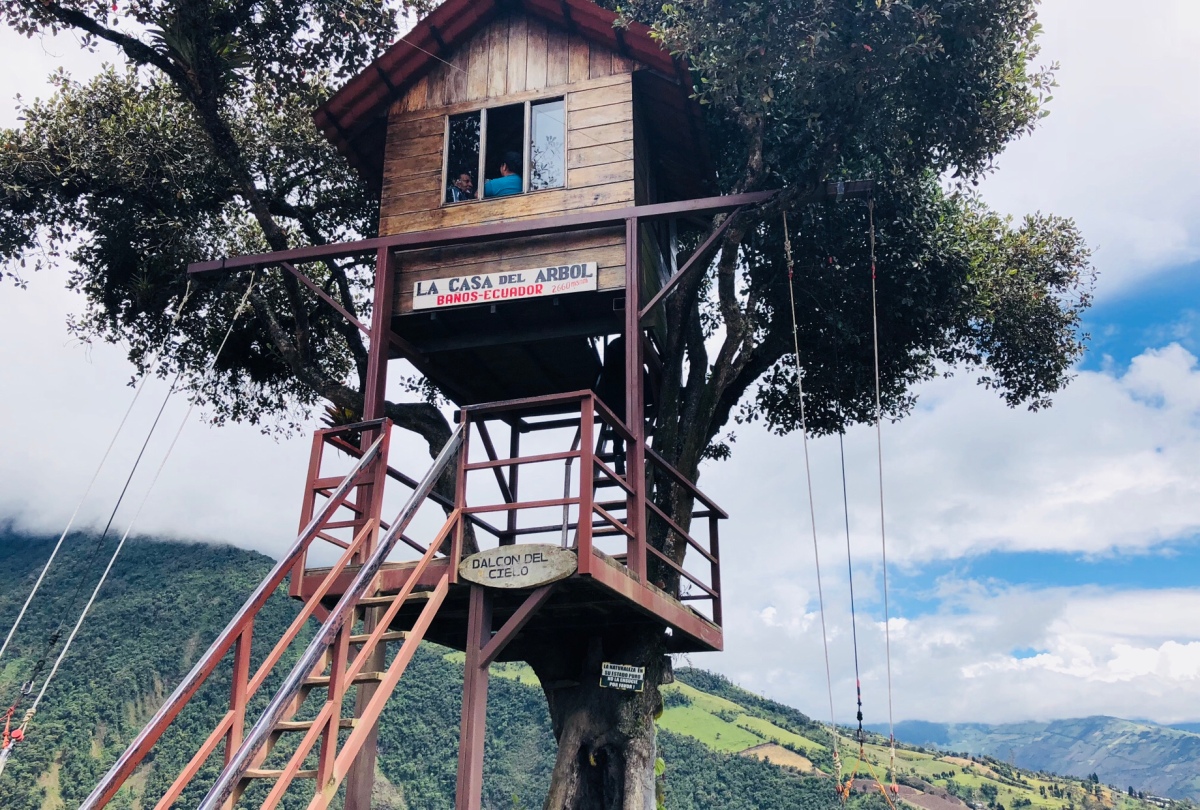 Our goal today was to hike from the town of Baños to Casa del Arbol, one of the must-do things in Baños.

You can also check out our trip to Peru and Machu Picchu.

Our goal today was to hike from the town of Baños Ecuador to Casa del Arbol, one of the must-do things in Baños.  It’s a challenging hike, starting from 1,810 meters in Baños to 2,660 meters at Casa del Arbol, an elevation gain of 2,800 feet. To get to the trailhead, head down Avenue Maldonado way from the river and you eventually come to an upaved road

The climb to Bellavista

The road turns into a trail, turns left and begins to climb steeply for a long time

After about 45 minutes we reached Mirador Cruz de Bellavista.  It’s the site of the big cross you see from town.  The view of the town of Banos and the surrounding valley is amazing.

From this point, the smart thing to do would be to follow the road all the way to Casa del Arbol.  But I guess we are not smart; we heard there was a trail that went there and decided to try to take the trail to the top that cuts through the switchbacks of the road.  The problem is that the trail is not well marked.  There was only one sign at Bellavista and we decided to follow a trail that pointed to Mirador de Runtun.

The trail was very narrow and overgrown, and a couple times we wondered if were were going the right way.

Two times there was a “Y” in the trail and both times we took a left (we do not have a good reason for doing that; it’s just what we chose).  After about 15 minutes we came to a road.  We looked for a trail that crossed the road and didn’t see one, so we turned right on the road and followed it.

About 15 minutes later we saw what looked like a path that crossed the road (we wondered if we took a right at one of the “Ys” if we would have come out here).  We decided to take the trail on the left side of the road.

About six minutes later we came to the road again and realized we just cut off a large section of road.  So we crossed the road and continued along the trail hoping we would continue to cut shortcuts up the hill.

We liked this next stretch as green walls surrounded us.

From this point on (at this point we had been hiking for about 90 minutes) all I can say is that we were confused much of the time.  About 10 minutes later, the trail ended at a “T” in a road.

We wanted to keep going up and the road to the left looked to be going up a little more than the one to the right, so we went left.  That was a mistake.  About 5 minutes later we walked into a tiny village with a couple houses and a basketball court. But we couldn’t figure out what to do next.  We decided to go back to the “T” in the road and go the other direction.  About five minutes later we came to a cross trail.  There was a sign on the left side of the road that said “volcan vista” with an arrow pointing to the left.  We decided to go left and up the hill.

About 5 minutes later, the trail came to what looked like a small farm (sorry no photo).  The trail ended but we noticed some grasses tromped down creating a small path.  We cut through that path and in a couple minutes came to a road.  We decided it would be wise to stop taking paths and just follow the road the rest of the way up.  We took a right and walked up the road.

Almost immediately we saw a sign for Casa del Arbol, and felt relieved.

We followed the road up for what seemed like a long time.  Each time we came to a bend in the road we expected Casa del Arbol was around the corner.  Over and over again we were disappointed.

Finally, after climbing along the road for about 30 minutes, we noticed signs on the right pointing to Casa del Arbol.

Never mind; the trail climbed steeply for two or three more minutes but finally we saw the gate to Casa del Arbol.

We paid a $1 entrance fee and walked into the complex surrouned by amazing views of the mountains and valley.

The main attraction of Casa del Arbol is what I like to call The Swing of Death.  It’s a tree swing that swings out over a precipice.

On our climb, we discussed The Swing of Death.  Brandon decided he was going to brave it.  I decided to pass.  No thank you.  I don’t care what any of you think.  You were not even there.

We walked up to the swing and asked where we buy tickets.  The guy working just pointed Brandon onto the swing.  Wait, for only a dollar you not only get into the complex but also get onto the swing?  What a deal!

After Brandon, a big macho guy got on the swing.  I wanted to see how he handled it, and on each pass, I looked closely at his face.  His eyes were huge, and he was not smiling.  In fact, I would say it was a look of fear.

The big macho guy looked scared.  Why would I ever get on that thing?

Macho guy got off and worker guy pointed to me.

I just stood there.

I don’t know what possesed me but I got on the swing.

The crazy worker pushed me out over the precipice.  I admit that a swear word came out, but thankfully it started with a “c” and not with “f”.

Believe it or not, after that first rush of adrenaline, I actually started to get more comfortable.  I’m glad I did it.  It’s an experience I will never forget, and I didn’t soil my shorts.

There is more to Casa del Arbol

After that I was hooked.  What else was there to do?  There was a small zipline.  Count me in.

Another ride on the swing.  Count me in.

Tipping upside down on the swing.  Count me in.

What possessed me?  I don’t know.  But each time we step out of our comfort zone, we amaze ourselves, and our self-confidence grows.

The fun was finally over.  It was probably the best $1 I ever spent on a vacation. After taking almost three hours to hike up, we decided we did not want to walk back down, so, for $1 we took the bus for a 35 minute journey back to Baños.

If you don’t want to hike all the way up, for $1 you can catch a bus from the corner of Rocofuerte and Pastaza.