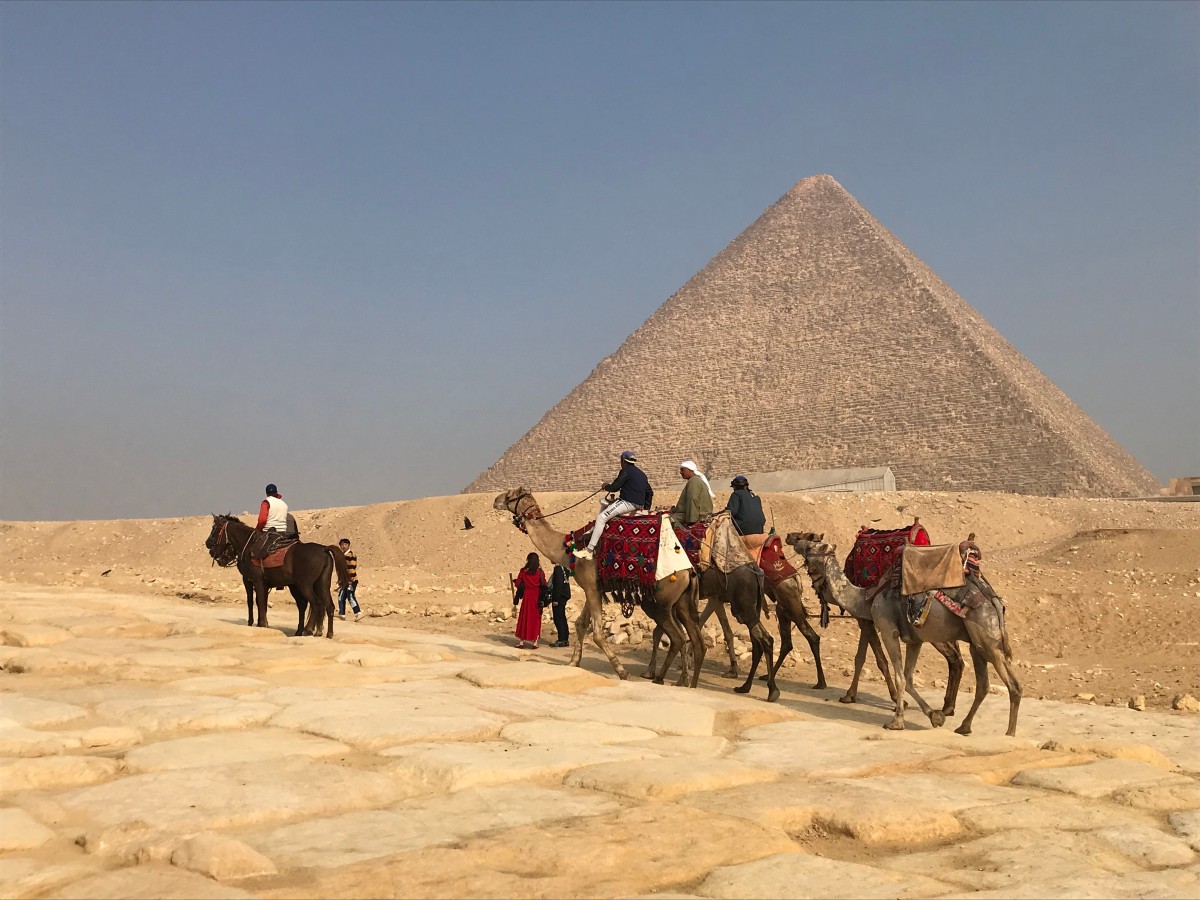 We were planning to go to Egypt but I had no idea about anything in Egypt and the pyramids; so here is a summary of my research.

Most international flights will arrive at Cairo International Airport (CAI).  The airport is relatively far from the city center.

I took Uber straight to the Giza area and it was 195 Egyptian pounds. The ride took about 55 minutes. Pickup is in parking lot B-5.

It takes a little while to get used to having a camel walk by you when you are crossing a street.

Those touristy camel rides at the Pyramids supposedly have a fixed price.

However, if you are willing to hold out, numerous times I was approached by someone offering me “a special price” for a camel ride, often about 200 Egyptian pounds.

I changed currency at the airport and felt I got a price very close to the going rate.

The fact that The Sphynx is on their currency makes me excited to exchange my currency.

ATMs are readily available in tourist areas, and many of them have screens with directions in English.

Electricity in Egypt is 220 volts. The plugs are the same as those in Europe. Laptops and cell phones are designed to operate on 110 volts or 220 volts so those should be fine. If you come from a country like the United States, all you need is an adaptor.

However, if you come from a country that operates on 110 volts (like the United States), for other appliances you will need a voltage converter.

The official language in Egypt is Basic Arabic.

Be sure to learn a few basic phrases in Arabic as a courtesy.  Google Translate

Prior to our trip, I met with someone who lived in Cairo for a while and was told some useful phrases. These are the phonetic versions.
“Greeting” – as salam ah lay kum
Please –  min fud luk
Thank you – show kraan
You’re welcome – a’afwan
Yes – ah
No – la’a
How much? – Bih kem

You may need to say la’a often if people are pestering you to buy souvenirs or provide tours.

With that all said, most people I encountered spoke English, so you could get by only speaking English.

I’m not talking about bugs. I had heard that tourists get pestered a lot. Holy cow! It’s more annoying than I thought. Just be aware. And don’t let it ruin your visit as the sights are amazing.

Everything appears to be very cheap in Egypt, and apparently everything is negotiable. Don’t accept the first price you hear; prepare to haggle or else accept that you will be charged a higher price simply because you are a tourist.

The first thing I hear when I tell someone I am going to Egypt is how unsafe it is. Note that none of these people have ever been to Egypt. Of course, it is a potential concern, but I wanted to hear from tourists who had actually been there, so I read a lot of stories online from people who have actually traveled to Egypt.

In everything I read, people said they felt very safe in Egypt. Their main concern was being hassled by touts or pestered for a basheesh (a tip). My experience was the same.

There seem to be a lot of scams in Egypt, so many that I decided to write a completely separate post on them. Scams in Egypt

WiFi is poor in Egypt so we decided to get a SIM card. This is what I found in my research.

There are kiosks in the Cairo Airport for four different carriers – Vodafone, Orange, Etisalat and WE.

Make sure your phone is unlocked.

Being in a car is an experience in Egypt. For example I noticed that lane lines seem to be “rough guidelines” for the drivers. No one really stayed between the lines.

The biggest challenge though was intersections, as none of them had street lights. Every intersection was a free for all. People would pull into the intersection right in front someone else hoping/expecting they would stop. Someone would come at you from the left (which is normal), but at the same time another car would be passing by on the right.

There is no way I would rent a car in all that chaos. And if you are in a taxi you just have to trust that your driver goes through this every day.

Oh, and watch out for the camels and horses.

We are fans of using trains around Europe.  However Egypt is a little more challenging. The trains are cheap…for locals. But expensive for tourists unless you get a local to buy the ticket for you. It seems tricky to just to get a cheaper ticket. Better details can be found by reading The Man in Seat 61. That’s my go to site for train travel.

Nile boat cruises are very popular, especially from Luxor to Aswan. Unfortunately we will not be there long enough to take advantage of one. However, I do plan to go back in the near future and a Nile cruise is part of the plan. If you are flexible, you can get a deeply discounted cruise the day of departure, as they don’t want to have empty cabins.

We plan to use Uber in Cairo (which I hear is very cheap anywhere in the city), fly to Luxor (the train is much cheaper but we don’t have the time on this trip to spend 10 hours on the train), and then use taxis in Luxor.

Travelers need a visa to enter Egypt. The easiest thing to do is get a visa on arrival at the Cairo airport. Head to one of the bank kiosks, show your American, Canadian or EU passport and pay $25 (exact change) in U.S. dollars and receive your visa stamp in your passport.

The visa rules are different for citizens of other countries and I am not certain of requirements for those countries.

Another option is to apply for an e-visa ahead of time. I did not do this because I read numerous posts about people applying for visas via scam websites. Even if the site is not a scam, you will pay considerably more for their services. If you do feel it is necessary to get an e-visa ahead of time, be sure to only use the official Egyptian website.
https://visa2egypt.gov.eg/

It is not advised to drink tap water in Egypt as it is highly chlorinated. To be safe, buy bottled water. It was very cheap, 5 LE (about $.29) for 1.5 liters.

Durng the winter temperatures can swing from in the 40s F/10 C overnight to about 70 F/20 C during the day.

We went in March and the lows were in the low 50s and highs getting close to 70.